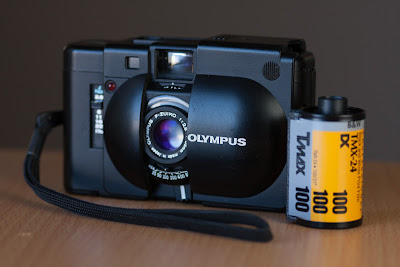 Mini-review of the setup:

Camera: This is another that I've had a fair bit of prior experience with. I've bought and fixed and sold a few of these and they are great intro cameras for people that haven't shot film. They're great for that purpose because they aren't intimidating.

The design is friendly, it doesn't weigh you down with questions of whether you're worthy of putting film through it like some of the big pro film bodies do like the Nikon F3 or Canon F1 where you *have* to know what you are doing. Instead, it welcomes you to just take the picture and then it does all the work for you. You only need to decide on a few things, just the right blend of automation. You pick the aperture. Why the aperture? Because it changes the way that the photo will look, more than shutter speed will. Of course there's somebody that just read that and cries "Well, what about long exposure? Motion blur changes the way a photo looks too!!!" and yes, that's true. But aperture is by far the more important of the two.

The other thing you have to decide on is the focus point, and with the tiny lightweight lever that the XA provides to do so, it almost trivializes the importance. It's not a giant 85mm f/1.2 or 105/1.8 where you are cranking away at the focus ring slowly honing in, it's a quick 1/4 turn or so of the lever from close up to infinity.

The shutter speed read-out in the viewfinder is hard for me to see with glasses. Some people say these have faint RFs and that's true to a point compared to something like the full size Leica RFs and their copies like the Canons, but likely it just needs a full proper cleaning. The front glass panel can come off which traps a bunch of dust along with the rest of the optics in the VF/RF assembly under the top plate and so...there's definitely improvement to be had if yours hasn't been in for service.

Other quick notes: Film loading is easy, battery is easy to check and change, rewind is fast with the regular crank, aperture selection is easy (that linkage should be cleaned and lubricated, it should be nice and smooth!) and film winding is actually kind of fun as it most closely resembles the throw-away 35mm cameras, it is not a winding lever.

As for what I did on this one, here is the complete list:

Lens: This lens gets mixed reviews. Some folks say it's not sharp enough, it flares too easily and it's got horrible vignetting in the corners at every aperture. Well, it's also the size of a dime and the entire camera fits into a normal men's pants pocket without looking weird.

I find it sharp *enough*, contrasty *enough* and the vignetting, well, it does do that but I doubt you're really going to care too much once you start using it more frequently and getting photos that you never would have whipped your big camera out of the case for. It's all trade-offs and the XA makes some very good ones.

In 2017, if you're looking to shoot 35mm film, you have to be doing it because you love the cameras. It's not hard to find small digital cameras that can do better image quality, and it's not too hard nor expensive at all to shoot medium format and get image quality on film that is leaps and bounds beyond what any 35mm unit can do. So, if we accept that 35mm film today isn't about the highest image quality (which it never was, except for those whose camera quality ladder stops at Leica or small-format Zeiss), then it's about the rest of the equation which is the process and therefore, more grain or more lens quality "faults" that something may have are no longer truly faults, just parts of the process.

Film: I bought a small brick of this T-Max 100 film from a discount re-seller that had no idea it was even there in their store. I also bought a small brick of Kodak Elite Chrome slide film that was expired in '03-'04 and that showed some age and storage related fading/color errors so this TMX was likely not stored very well either. It still shoots well and with this project, the 24 exposure rolls have been nice on days that I can't spare time to shoot a full 36.

It's definitely got more grain than TMX 100 should, and my processing has been a bit sloppy to begin this project. I have used Kodak's HC110 straight from the High-ly Concentrated form that it comes in, a thick syrup. 1:100 ratio of syrup to water, enough water to cover the film in the tanks and relatively low agitation schedule (10-15 sec initial, 1-2 agitations every 10-15 mins for 2 hrs complete time). This has worked well in the past but for the first few tanks of this project, I got distracted and the negatives show flaws (uneven sky tones, what looks like over-sharpening which is actually from the developer exhausting itself on the darker areas that border the lighter areas and giving halos, amongst others).

It's still a good film, even in expired form, it just can't be expected to perform like new.

After processing notes:
Well, I'm somewhat disappointed in these results. Mostly due to lack of aiming the camera at more interesting things, but also because I can see clear errors in the developing. I had been using semi-stand development for almost a year, and somehow I screwed up almost every single one of these first 10 rolls.

I know an XA can be better than this, and when I look closely at the negs, it's obvious that the camera did it's job fine, my developing and scanning just aren't as good as they could be to show that off. I know the flatbed scanner is not very good for 35mm, especially Kodak which seems to bow up in the middle more than other brands. I can wet-mount medium format but haven't been able to get 35mm to wet mount effectively. 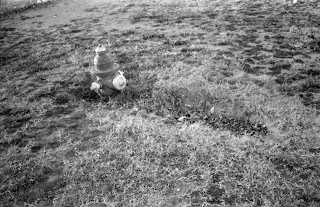 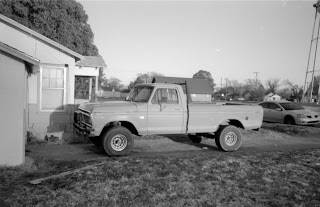 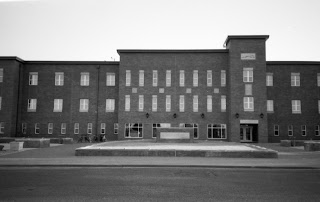 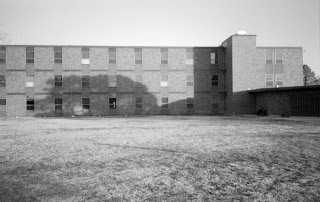 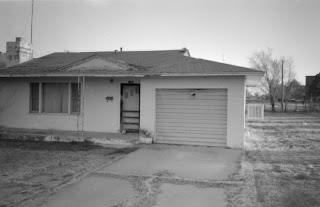 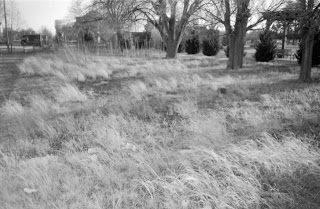 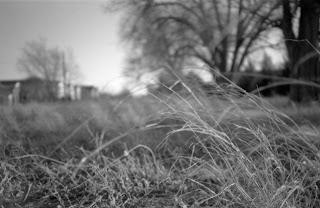 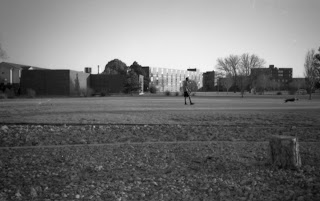 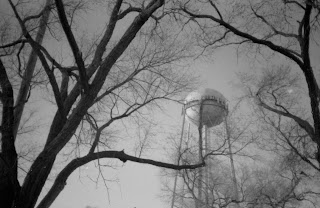 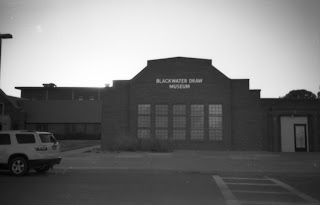 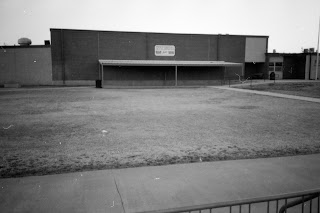 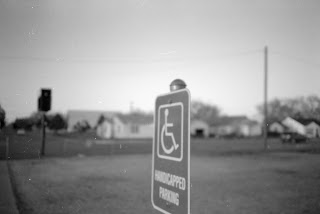 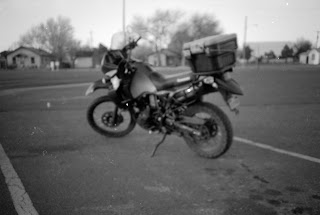 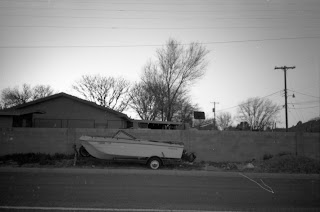 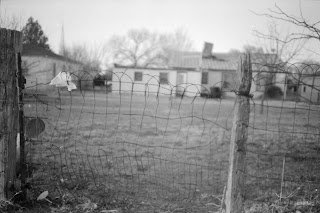 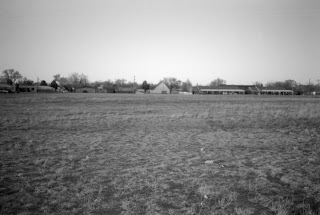 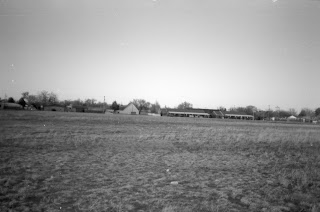 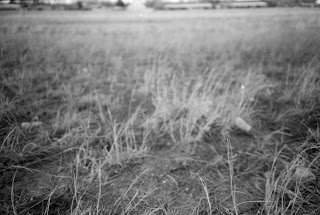 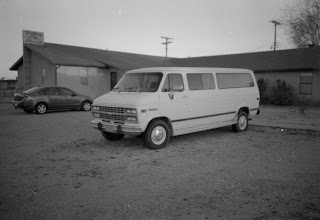 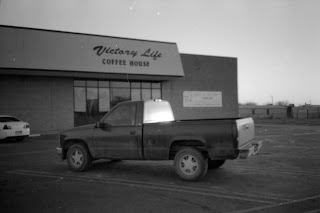 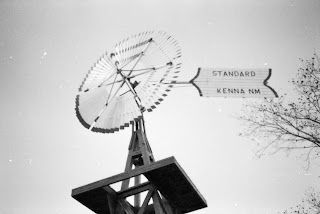 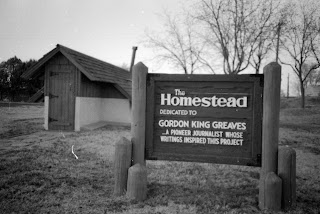 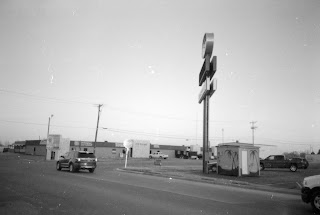 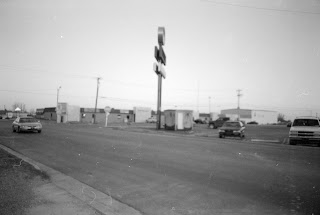 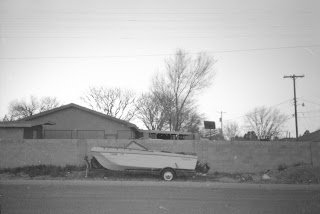 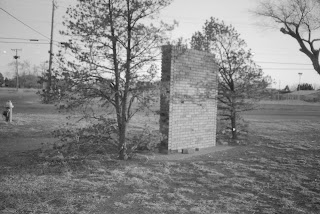